The Heresy Innate to Abortion

God is patient with slights to His own honor. But God is not patient with cruelty. This is proven historically.

God desires to be forgiving and forbears. God sent a prophet to save Nineveh. God also has been patient with nations like China for 4000 years. even though many of the philosophies they have held were idolatrous from the Torah's perspective. Nevertheless God did not bring cataclysm upon them. Whereas those cultures that were cruel to humans, the Canaanites, the Sodomites, the Mayans; all perished violently. I am relieved and happy for China that they gave up their one child per family policy.

I once asked a question of one of my mentors, Rabbi Aaron Soloveichik, OBM, on why does the Torah seem to sanction genocide in some cases of idolatrous nations (Canaanites) and value life so highly in others (like Nineveh.) He said, that “The only idolatrous nations that the Torah sanctioned to face full destruction were ones that had in them nihilistic forms of idolatry; that wanted to return the world to Tohu veVohu (null and void), such as those that had in them child sacrifice, like the Molech worshipers.”

Thus only societies that practiced child sacrifice where children were indoctrinated that no life at any age is precious, were in the category of being a threat to the continuance of civilization itself.

The Torah not only says this of molech worshipers, but implies it was much more wide-spread than just that lone cruel religion, as we find (in Deut 12:29-31),

“When the Lord, your God cuts off the nations to which you will come to drive them out from before you, and when you drive them out and dwell in their land, beware, lest you be attracted after them, after they are exterminated from before you; and lest you inquire about their gods, saying, “How did these nations serve their gods? And I will do likewise." You shall not do so to the Lord, your God; for every abomination to the Lord which He hates, they did to their gods, for also their sons and their daughters they would burn in fire to their gods.”

The Torah says repeatedly, “And you shall remove the evil from your midst.” And child sacrifice is quintessentially evil.

Lest you think that we are surely doomed, remember that God was willing to spare Sodom if only a small but significant minority of the people were found righteous.(Genesis 18) The path to penance, is to begin to trust in the Merciful Father's great sense of mercy for crimes you may have committed or supported in the past.

Even for the sake a mere percentage who are for life, calamity can be staved off from our nation. Don't you dare give up the good fight. Others are depending on us. More than you may imagine.

May all humans share in this glorious merit. May it soon be so, by the grace of God. 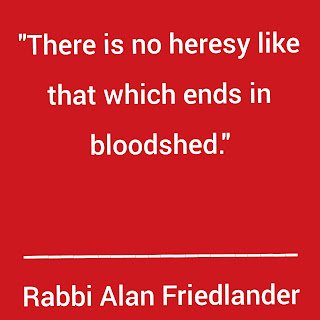 Jewish pro-life Judaism and abortion abortion in the Jewish religion
31Mar
What Is Life?
20May
Pro-life facts that begin at conception
26Jun
The Wrong View of Judaism and Abortion
Comments
Brooklyn, NY, United States